Top 10 Python Use Cases and Applications

Every business faces a lot of  challenges when they want to choose the right and best high level programming language for their next big projects while keeping end-to-end functionality, efficient runtime, scalability, and versatility in mind.

However, hitting that sweet spot of efficiency, functionality, and versatility has gotten a lot easier in the previous decade(s).

This is probably because of the emergence of the Python programming language – the modern holy grail of data science, machine learning, web scraping, and all of the above. Python is a simple programming language that anyone can learn easily and is secure, scalable and supports a rich set of pre-built libraries. 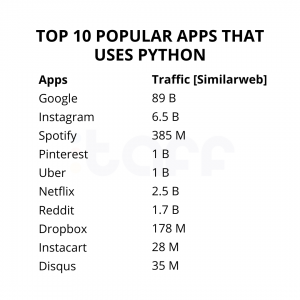 Top 10 Use Cases of Python

Python aids in the rapid development of web applications that are both scalable and secure. This is made possible and easier with the availability of web frameworks like Django, Pyramid and Flask. These frameworks offer easy integration with various protocols like HTTPS, SSl, etc and also support JSON and XML.

Data science is a relatively new field that has gained significant importance in recent years and Python is the go-to choice for developers working on Data Science.

Unlike Java, Python offers many libraries to handle Data science projects like Pandas, NumPy, etc. Additionally, Python also offers data libraries like Matplolib, Seaborn, etc for rich data visualizations. Data science is one of the most lucrative career prospects in the technology industry today and for anyone who wants to start with Data science should know Python first.

Python is extremely popular in the field of machine learning or AI. Despite the age-old language, Python has evolved to fit into multiple new technologies.

Python is a stable language that can handle the huge set of computations required for building complicated machine learning modules. Sensorflow, Numpy, Keras, Scikit-learn are some of the popular libraries offered by Python to work on machine learning and artificial intelligence projects.

Python is versatile as it supports multiple use cases. Apart from normal web development to complex AI, Python also aids in Game development.

Python libraries like PySoy and PyGame enable 3D game development. No matter what field you are in, Python already has a library for you to get started easily.

One of the standout features of Python is its ability to connect with hardware devices easily. Whether it comes to IoT or Robotics, Python can be useful.

Python offers smooth integration with Raspberry PI hardware platform which can be used to develop embedded applications, Robotics and IoT projects. Python can easily run on Linux and for microcontrollers, one can use MicroPython. Eg: PyBoard.

With Python, developers can extract huge volumes of data from multiple websites by entering the URLs. Some of the popular libraries for web scraping in Python are Selenium and PythonRequest. Python easily ranks no.1 choice for developing web scraping applications.

So far, we’ve been talking about Python mainly as the backend but we can develop rich frontend applications using Python. Tkinter library in Python can be used for designing user interfaces. Python toolkits like PyQT, Kivy, PyGUI, etc. helps in designing UI applications across platforms.

Python can be used to develop complex and huge enterprise-level applications since it is both scalable and secure. Python is largely used for database handling and it supports multiple database requests simultaneously. The most important functionalities of Python like readability and scalability make it a top choice for ERP applications. Python offers a simple and easy-to-understand syntax which makes it easily readable.

Tryton is a Python platform that enables the development of business softwares and ERP.

Odoo is an open-source ERP framework provided by Python that is used by more than 7 million users worldwide to develop ERP applications.

Python offers an easy to integrate Python SDK which is used to develop and integrate with third party applications using API. Python offers various libraries which makes connecting and working APIs a breeze.

As mentioned earlier, Python is a highly ‘readable’ language and is widely used for developing online courses.

From web apps, enterprise apps to gaming apps, the application of Python programming language now ranges to a wide variety of applications. TAFF has been using Python since our inception to develop various applications in the field of Data Science, ERP, IoT, etc for various clients.

At TAFF, we have an expert team of Python developers who are there to help you build a Python app. Feel free to get in touch with us for your Python-based requirements.

Taking the Cloud-Native Approach with Microservices